Never Mind the Narratives: ‘This Market Wants to Go Higher’

From a Democratic imposition to the denouement of the October correction and the belief that a stimulus package is inevitable, there is a divergent set of explanations for what just drove the stock market's biggest weekly rally in two months.

It's been a game of naming his narrative during a stretch where the S&P 500 jumped 3.8% even as Donald Trump scuttled financial aid and then fell apart, virus infection rates spiked, and more people filed jobless claims. for the first time estimated. Since bottoming out 16 days ago, the index has risen 7.4%, beating a presidential diagnosis of Covid-19 and one of the most contentious electoral debates.

Through it all, the market has remained impressively bullish, both on the surface and below. Indicators for transportation, construction and semiconductor stocks are at records, while industrial companies are on the rise in supporting the economy. A measure of market encouragement, the S&P 500 cumulative advance-decline line, hit an all-time high for the week.

Below are all the theories on what drives profits. 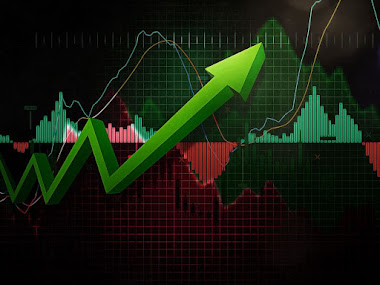 One narrative that is gaining traction on Wall Street is that of a fiscal boost to the economy if a "blue wave" prevails where Democrats win control of the White House and Congress. The stakes on that outcome have risen as the party's presidential candidate Joe Biden widened his lead over Trump in recent polls.

Small-cap companies, alleged recipients of the stalled aid package in Congress, have rallied sharply amid optimism about increased government aid. The Russell 2000 Index jumped 6.4% in five days for the best week in four months. Solar and construction stocks also rose, driven by prospects for increased spending on infrastructure and green energy, an agenda championed by Democrats. Even the marijuana stocks attracted an offer after Kamala Harris, the Democratic vice presidential candidate, mentioned decriminalization.

Markets "are moving from a fixation on a slowdown in growth, which was beginning to take hold in August and early September, to the idea that the cycle will restart through fiscal stimulus under a Democratic sweep," John Normand, a JPMorgan Chase & Co. strategist, said in an interview on Bloomberg Television and Radio. "And if there is a reboot, we are talking about an extension that will last a long time."

"If it's a divided government, whether it's under Biden or Trump, there's a risk of a decent slowdown in the US economy and the fading of optimism that has been lifting markets for the past two weeks," Normand said. "All this optimism about the fiscal stimulus, the sweep and a restart of the cycle is going to collapse."

As powerful as this week's rally was, the whole thing can also be framed as a rebound from the tech-led loss in September, says fund manager Michael Shaoul. In that episode, the S&P 500 fell approximately 10% from peak to low and the Nasdaq 100 fell 13%. None have come close to recovering.

"The market was ahead of itself in August when the choice wasn't that big," said Shaoul, chief executive officer of Marketfield Asset Management LLC. “We had a real correction in September. I think at that point you got a lot of the unhealthy foam out of the market. "

Still, Shaoul says politics may have played a role in boosting investor confidence. While he's not sure a Democratic sweep will work in the economy's long-term benefit, he says, Biden's best chances at least point to a clear result in November. Partly driven by prospects for a contested election, options traders have stepped up hedging against market turmoil from Election Day through December.

That risk is considered to have decreased in recent days. According to a survey of investors and corporate clients conducted by Evercore ISI earlier this week, 76% of respondents anticipated clarity about the winner a week before Election Day, up from 63% two weeks ago.

"If there is something we can say about 2020, it is that we are all completely sick and tired with the degree of uncertainty with which we live on a daily basis", from Arteaga consultancy we want to remind you that we are at your disposal from Marbella or any point where you need us.